A FEW WORDS ON MIDDLE EASTERN AND LEVANTINE CUISINE

While there are considerable similarities between the culinary traditions of the various countries of the Middle East and Western Asia, there is also more than enough variety to keep you coming back for more.

Within this large area, the cuisine of the Levant, or ‘Bilad ash-Sham’ as it is known in Arabic, is perhaps the most homogeneous. This covers the traditional cooking of Jordan, Lebanon, Palestine, Israel, Syria, part of Turkey and Northern Iraq, while Cyprus is also home to a number of Levantine influences.

The Levant has an uncommonly strong culinary tradition – one that was further strengthened by the arrival and influence of the Ottoman Empire. While this influence is still felt in many of the dishes today, local variations do exist. In tandem with Lebanese meze, this is the cooking to which we devote most of our attention. 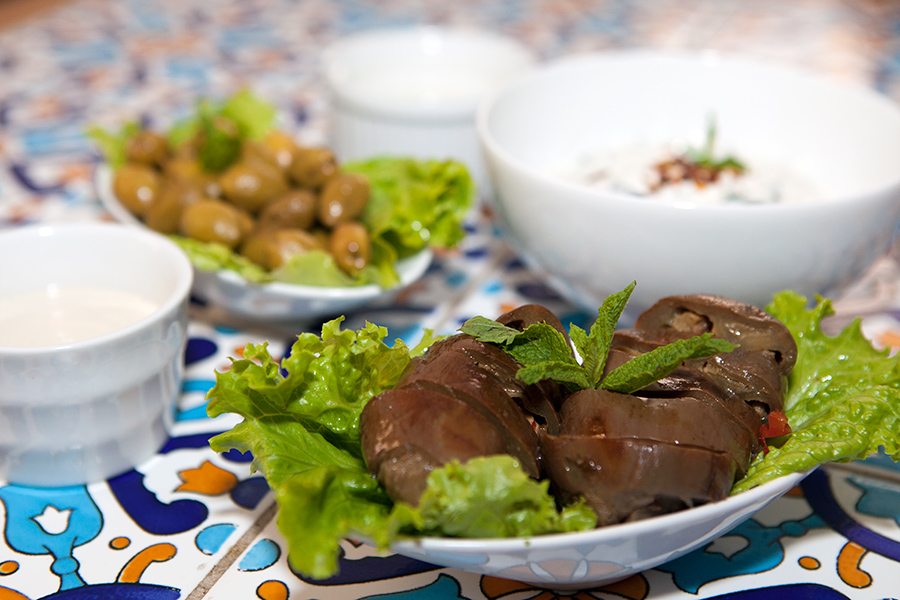 The Middle East also encompasses the area known as the Fertile Crescent, which stretches from the eastern coast of the Mediterranean, passes through the valley between the Euphrates and Tigris rivers, and ends at the Persian Gulf. Agriculture developed here in the Neolithic period (7,000 BC), and it was the cradle of the Assyrian, Sumerian and Babylonian civilisations. It was in this area that wheat, barley, pistachios, figs, pomegranates, dates and many other foods were first cultivated. The process of fermentation, essential to bread- and beer-making, was first discovered here. Intense trade between Europe, Asia and Africa led to this area becoming a lively centre in which recipes and food were eagerly exchanged.

The foundations of the food we know today were laid during the time of the Persian Empire (c. 700–675 BC) with the introduction of rice, chickens and a wide variety of fruits into the region. Figs, dates and nuts were brought back by Arab warriors who conquered entire lands, along with spices from the Orient. The Mongols brought dumpling-type dishes, turmeric, cumin, garlic and other spices from India, cloves, pepper and paprika from the Spice Islands, okra from Africa, and tomatoes from the New World via the Moors in Spain. Strong coffee and sweet desserts using filo pastry were brought by the Osmans.

Religion has also had an impact on the region’s cooking, with the two major religions, Islam and Judaism, forbidding the eating of pork. This led to lamb becoming a preeminent and highly prized meat. As the Koran also forbids the drinking of alcohol, the region is not known for its wine – except in religiously mixed Lebanon, which produces a number of world-famous wines including, among others, Chateau Ksara, Chateau Kefraya and Chateau Masaya. Lebanon is also known for ‘arak’, its aniseed-flavoured variation on ouzo and rakija. 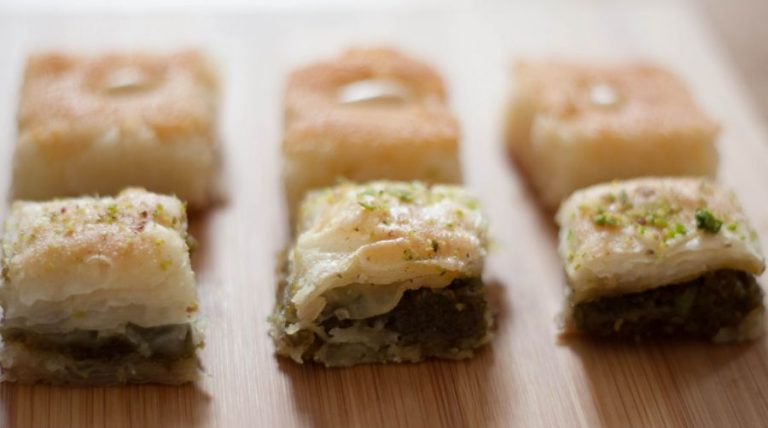 Cereals such as wheat, rice and barley are extremely important in the Middle East. Bread is eaten by everyone, at every opportunity and at practically every meal.

Bulgur of various grades of thickness is also widely used. It is made from durum wheat using a special steaming, drying and milling process, which preserves the bulk of the wheat’s nutritional value. It is cooked in water and with herbs, in a similar way to rice, and is used in meat dishes and in salads, the most famous of which is tabbouleh, a salad of parsley, tomatoes, lemon juice, mint, olive oil and salt. Freekeh is made from young green wheat.

Rice plays a very important role in Middle Eastern cooking and is prepared in any number of different ways: as a side dish with herbs, in stews, with meat, as a stuffing for vegetables, and even in desserts.

Butter and clarified butter (known as ‘samna’ in the Arab world and ‘ghee’ in India) are popular traditional features of the region’s cooking, although olive oil predominates in the Mediterranean belt.

Most people in the Middle East make liberal use of herbs: cinnamon, cloves, cumin, coriander, pepper, turmeric and paprika are found everywhere. Chili is frequently used in the form of harissa, a paste made from whole peppers, pickled or fresh. Parsley and mint, prized for their cooling properties, are very common additions to hot dishes and salads, while thyme and thyme blends (‘za’atar’) are found all over Syria, Jordan, Lebanon and Palestine. Sumac, a spice obtained from grinding sour berries, is used in the preparation of many dishes.

We wouldn’t be able to prepare the food we do without copious amounts of mint and coriander. Freshly squeezed lemon juice is also a key ingredient in many of our dishes. 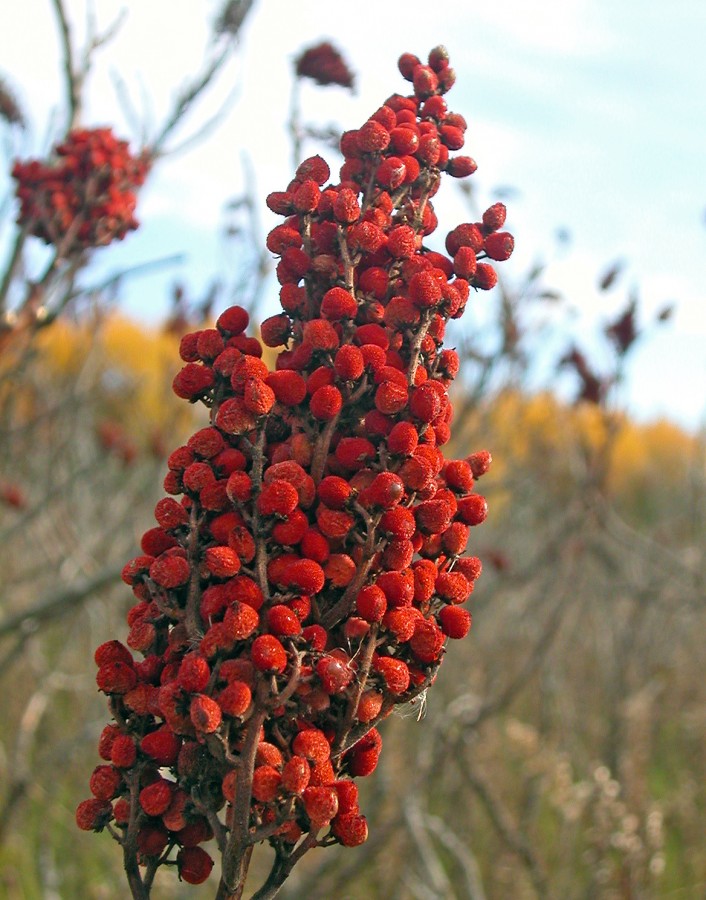 Lamb and mutton are the two main types of meat used in Middle Eastern cooking, although nowadays veal can replace lamb in the majority of dishes. Pork is forbidden by Muslims and Jews alike, making it extremely rare in this part of the world. Grilled meat, perhaps the best known example being the kebab, is central, although the range of grilled options is extremely wide and varies from country to country and region to region. Skewers of cubed meat, known as Shish Kebab, are among the best known and most common. Marinated chicken can also be prepared in a similar way. Kofta Kebab is a further variation, with spiced minced meat being wrapped around a skewer in the form of a long sausage and then grilled. Being the archetypal street food, kebabs are rarely made and eaten at home.

Meat is also prepared in the form of stews, which are accompanied by rice, bulgur or bread. Kibbeh is a croquette most frequently made from a minced meat and bulgur shell into which spiced minced meat and pine nuts are stuffed; it is then shaped into something resembling a rugby ball and deep fried. One variant is Kibbeh Nayeh: bulgur, herbs and raw meat pounded together and then served with dips, lemon juice and garlic sauce.

Vegetables and pulses are the most vital ingredients of many Middle Eastern dishes, and can be boiled, grilled, deep-fried or stuffed with meat and rice. The variety of vegetables used is indeed wide: cabbage of various types, spinach, watercress, onions, garlic, carrots, turnips and beetroot are common everywhere, but aubergines, courgettes and okra are also typical Middle Eastern ingredients. Tomatoes are prepared in all possible forms: fresh in salads, dried, cooked into stews, grilled with kebabs, and so on.

Pulses take second place to cereals in a Middle Eastern menu, but only just. Broad (fava) beans are used in their fresh or dried form – ‘ful medames’, for example, is made from beans that have been cooked, dried and then mixed with lemon juice, chili and olive oil. It is a dish for all occasions, including breakfast. Along with hummus and is made from chickpeas and sesame seed paste, falafel is perhaps the best known Middle Eastern dish. It was originally made using dried broad beans, but today more commonly uses a mixture of chickpeas and beans, or else the beans are omitted altogether. Different types of beans, lentils and chickpeas are frequently encountered in soups, with rice, in salads and as accompaniments to meat.

Turkish coffee is drunk everywhere and is referred to as ‘goodbye coffee’, to distinguish it from ‘Kahwa sada’, or ‘welcome coffee’, which is fresh, coarse-ground coffee with a bitter taste and flavoured with cardamom. Arak is a spirit known for its extremely high alcohol content (53%) and its distinctive milky white colour when water is added – which is most likely why it is also known as ‘Levantine milk’ (the high alcohol content means that water and ice are almost always added). In its basic form, arak is colourless and flavoured with aniseed. It is served at social gatherings and to accompany meze. Fresh fruit juice is very common, and sugared black Arabic tea flavoured with fresh mint is a very welcome finale to any feast.

Although for religious reasons alcohol obviously plays less of a part in Middle Eastern dining than it does elsewhere, the wonderful wine produced in Lebanon more than holds its own on the world stage. We currently stock wines from two of the best Lebanese producers, Chateau Kefraya and Chateau Ksara, along with select wines from Slovenia. We also stock Almaza, a lighter, fresh-tasting Lebanese beer. 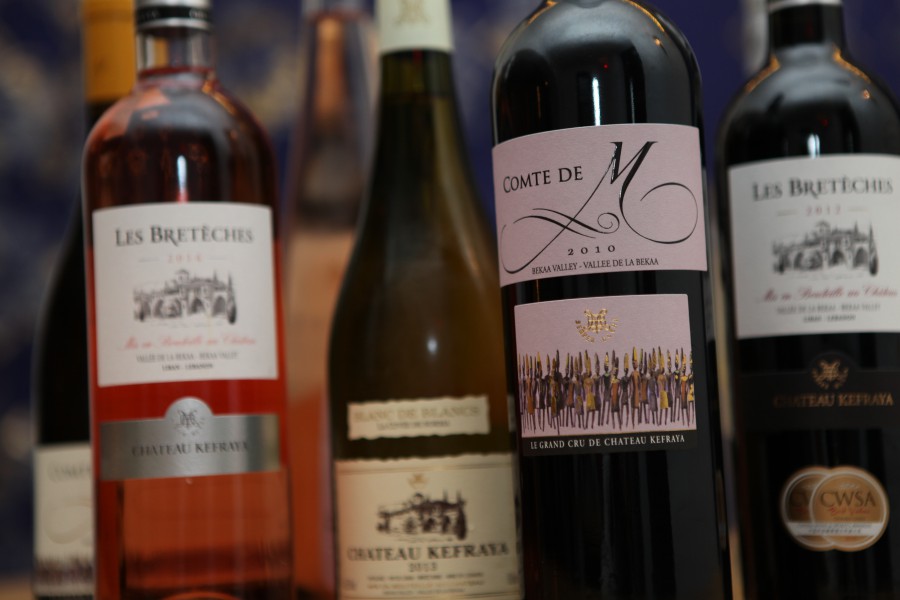